What is Baseball? It is more than a game, it is the National Pastime of most of the world.

It is played with 9 players on a team. The object of the game is to hit a ball, thrown by a pitcher,  with a bat and run (counter-clockwise) to four bases which then produces a “run”.

To produce a run, a player must touch each base (first base, second base, third base, and home base)after he hits the ball into “fair territory The team with the most runs at the end of the game is the winner.  The team “in the field” or on defense will try to prevent the batter from doing this.

One team is the Visitors (it has nothing to do with residence, however in Professional Baseball the visitors usually will be from a different city or town) and the other team is considered the Home team. The Home team is in the “field” first. Being “in the field” is considered to be on defense. 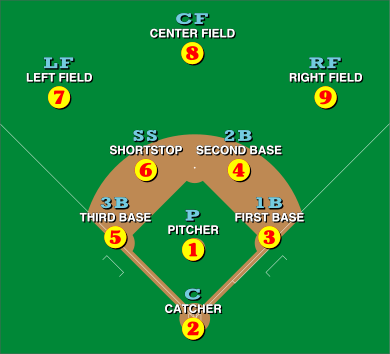 The positions for the Defensive team are First Baseman(see chart above: #3) Second baseman (4), Short Stop (6), Third Baseman (5), Left fielder (7), Center Fielder (8), Right Fielder (9), Catcher (2) and Pitcher(1).  Note: the numbers given a player position are for abbreviated  scoring for the official records in Professional or Amateur play (when official records are kept)

The team batting is considered on offense. On offense, a player uses a “bat” to hit the ball thrown by the pitcher. The nine players on offense go to bat one by one in order of the lineup card submitted by the manager or coach to the game officials.

They must bat in the order that is on the lineup card. In less formal baseball games, where no baseball officials are used (this is called sandlot or “pick-up” game), the “honor system” is used where the players follow the batting order rule by self-honesty.

Baseball can be played at any age, gender and any level of competence. with even less then 9 members on a team (if more players are not available). In this article, we will focus more on the Professional and College/High School level where the rules are strictly followed.

Rules and Strategy of Baseball

The game begins with the Pitcher throwing the ball to the Cather squatting behind the Home Plate. The Batter stands sideways and parallel to the Pitcher and Catcher and ahead of the Catcher,  in what is called the “Batters Box” The batter may stand on the right side (called a right-handed batter) of the batter’s box or on the left side of the batter box (called a left-handed batter).

When the Pitcher throws the ball to the Catcher, the batter may swing at the ball (known as the “Pitch”) and try to hit it as far as he can into the playing field or let the pitch go on to the Catcher.  (Notice the chart at the top of this page) , you can see the “foul line” which extends to the fence or stands.

If the pitch travels over home plate and is no higher than the player’s chest and no lower than a players knees, it considered a strike. A strike is also called if a batter swings at a pitch and misses or hits the ball into foul territory.

A batter has only 3 strikes and then must leave the batters’ box and sits on the player’s bench as his turn at bat is over and he is considered an “out”.  If the pitch from the Pitcher is outside of the described “strike zone” it is called a ball. When a batter receives 4 balls before receiving 3 strikes the batter goes to first base.

There are three outs to a team turn at bat.  When 3 outs occur the teams switch positions and the defensive team (in the field becomes the batters and the offensive (batting) teams turn or their half of the inning is over they are now “in the field” or on defense.

When the new batting team that was on defense or in the field,  gets 3 outs, they switch. This is called an “inning” There are nine innings to a game and the team with the most runs at the end of 9 innings is the winner.

A discussion will be made later on as to what happens when the game is tied at the end of nine innings.

How do “outs” occur? A strikeout is an out. If the batter hits a ball that travels on the ground and a defensive player “fields” it (stops it with body or glove) and throws it to the First Baseman before the batter who now is a “runner) and reaches first base that is considered an out.

If the batter hits a ball in the air and it stays in the playing field in fair territory or foul territory and a defensive player catches in the air and does not allow the ball to hit the ground, that is also an out. The third way a runner could be called out is if the runner is off the base he was on and running toward another base.

Some of the other ways a runner/batter may be called “out” is for the runner to try and run to another base during a pitch to the Home Plate.  In this case, if the defensive team throws the ball to a nearby “fielder” and the fielder touches the runner before the runner reaches the next base (safe zone) the runner is considered out and sits down on the player’s bench.

If the runner, in this case, reaches the next base before the ball is thrown to the nearest fielder, it is considered a stolen base by the runner.

A similar situation might occur when the batter hits a ball in the air to an “outfielder” (left field, center field or right field).  In this case, the runner must tag first base before running to second base and it has to be after the ball is caught by the outfielder.

It is common for a runner to take a “lead” of a few feet off the base toward second base.  The pitcher might throw the ball to the first baseman instead of the catcher at home plate and if the ball gets there before the runner gets back on the base and then the first baseman tags the runner and the runner is considered out and sits down on the player’s bench.

A runner must run the base in a counter-clockwise direction.  If the runner goes to third base instead of first base it is considered an automatic out and the runner sits down on the player’s bench.

“Running out of the designed basepaths” could also occur by intentionally leaving the base path and for a “short cut”  this is considered an automatic out and the runner sits down on the player’s bench.

If the game is tied at the end of nine innings of play, overtime or extra innings situation occurs. (actually, there is no time clock involved in baseball as with some sports) . As an example; at the end of the 9th inning, each team has the same number of runs, play continues another extra-inning until a team scores a run.

If the game was tied going into the bottom half of the extra inning only one run is needed for the victory.   Once the winning run is scored by the home team, the game is over and the records will show that it went into “extra innings”.

These are some of the very basic rules and strategy of play in baseball.  We will discuss the more advanced play in articles to come.

Thank you for reading.  I Hope This Was Informative

2 thoughts on “What is Baseball?”