This is a Product Review of Diamond Mind Baseball

What is DMB About 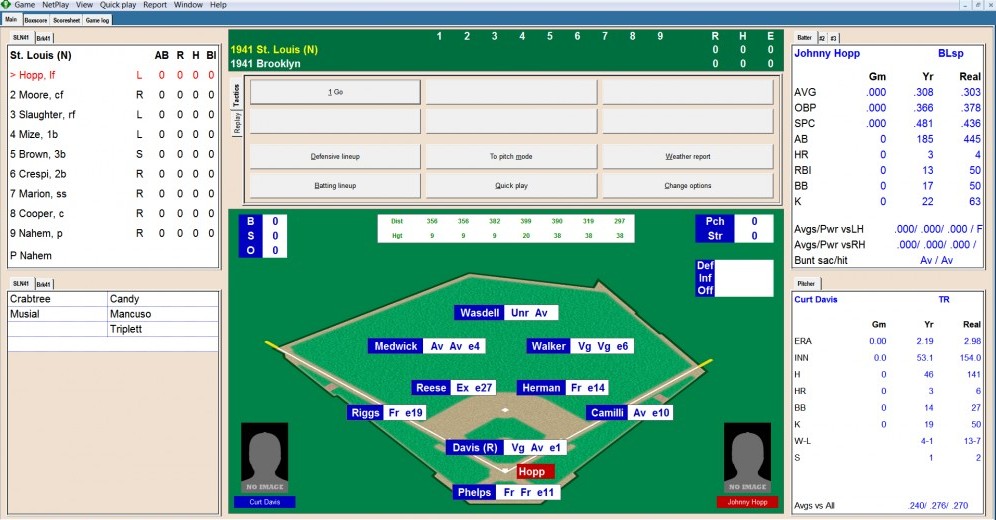 I have had DMB for about 15 years so I am happy to tell you about it.  This is a “text baseball game” not a “shooter”.  What do I mean by a “shooter”?  Maybe the word “arcade” game is more descriptive.  There are no animation of pitchers firing fastballs and no animation of batters belting home runs and stealing bases, etc.

This is a pure text only.  What then does it do to show what is happening.  There is a text box where the play by play is shown.  An example might be “The count is 1 and 2 and Jones fires a  fastball a little low for ball 2.  The count is 2-2 and here comes the pitch, Base Ruth drives deep to right field where Al Kaline is near the fence and looks up and it’s GONE. The Babe hit his tenth home run of this early season”  This is just a sample of how the game is played.  I haven’t even touched the “tip of the iceberg” yet.

No arcade baseball game where players are batting, pitching and running the bases can begin to touch the depth of DMB and the nice thing is that you are in charge of what your team or teams or league can do.

Many games let you “manage” one team or possibly two.  But with DMB, you can manage just one or every team in the league you have selected.  You can go into as much depth in the game as you want to.

If you know only the very basics of baseball (what is baseball?) you can start by playing just the basic game and let the computer make most of the decisions.  If you are a veteran fan (whatisbaseball.com/advanced-baseball-rules-and-strategy )or even a baseball player you can do everything from managing both teams during a game, making trades even changing the statics a player has for that season.

This is one of the most versatile baseball games ever made.  Let us have Diamond Mind Baseball tell you more about their product:

“As the manager of your own big league club, you choose your starting lineups from rosters of real players. You decide when to use a pinch hitter, attempt a steal, take the extra base on a hit or fly ball, bring in a relief pitcher, pitch around a hitter, and more. After the game, you can print or save to file a boxscore or play-by-play scoresheet of the game.

And Diamond Mind Baseball offers the first and only statistically accurate pitch-by-pitch simulation ever developed. You’ll be amazed at how much more strategy and drama is introduced to the game when you can call for pickoff throws and pitchouts, give your batter the green light on 3-0 pitches, and change your tactics on every pitch.

Your players make great plays and a few blunders, too, just as in real life. Certain ballparks will yield many more doubles and homers than other parks. The outcome of some games will turn on a wind-blown fly ball or a fielder slipping on wet turf.

You may suffer an injury to a key player just when you need him most, forcing you to sign a free agent, make a trade or call up a player from your farm system.

Diamond Mind Baseball automatically tracks injuries, forces managers to rest pitchers and catchers when they are tired, and compiles detailed batting, pitching, and fielding statistics. And it’s easy to exchange rosters, computer manager instructions, and game results with managers in other cities.

You can use real-life rosters, teams, and leagues, or create an entirely new league with the players drafted onto new teams. You can even create new teams, parks, and players, or assemble a custom league with teams from many Diamond Mind Baseball Single Seasons.

Simplicity. You do not have to be an expert in computers, nor do you have to know all the players. All player ratings, strategy options, and statistics are presented clearly on the screen when you need them.

Realism. To determine the outcome of every play, Diamond Mind Baseball examines the performance of the batter and pitcher against left- and right-handed opponents, how the defense is positioned, whether the pitcher is tired, ballpark effects, offensive and defensive tactics, the home field advantage, and weather conditions.

Detailed player ratings. Player ratings cover every meaningful aspect of performance. Batters are rated for their ability to hit for average and power, draw walks, avoid strikeouts, hit ground balls or fly balls, hit to the opposite field, bunt, and run the bases.

Pitcher ratings include the ability to prevent hits, induce ground balls, avoid walks and extra-base hits, get the key strikeout, and hold runners close. Fielders have separate ratings for range, errors, and throwing, and are rated for each position they play. Just as in real life, your players may or may not do all the little things that help you win.

NetPlay. Beginning with Diamond Mind version 9, you can play games head-to-head over the Internet against anyone else who is using the same version of the game and an internet connection.

Pitcher fatigue. Diamond Mind Baseball tracks your use of the pitching staff in each game and from game to game. It also tracks how many times a game a reliever has warmed up. A pitcher gradually loses effectiveness as he gets more and more tired.

All reports can be viewed on the screen, printed, or saved to a file in either plain-text or HTML format. And if the standard reports aren’t enough, you can also customize these reports to organize the stats that way you want to see them.

Beginning with version 9, you can also create groups of reports that can be generated with a single command. You can also generate an entire league web site featuring linked reports in HTML format.

Ballparks. Ballparks have a significant impact on real-life games and statistics. The same is true in Diamond Mind Baseball. Each ballpark is rated for wall height and distance, amount of foul territory, and other factors that affect games in that park.

Weather. In some parts of the country, you’ll see steady temperatures and very little rain. In other venues, cold April evenings will give way to hot, muggy summer days. And strong winds will be a major factor in some ballparks.

Play-by-play. Diamond Mind Baseball sports a varied and detailed commentary that will remind you of listening to your favorite radio announcer.

Fully integrated. The game includes all features in one package. No expensive add-ons to buy.

If you’re looking for more than an overview, then Inside Diamond Mind Baseball may be just the thing. This technical note gives you an in-depth look at the features that make it the leader in realism and accuracy, stats and reporting, flexibility and ease of use. It also describes how Diamond Mind Baseball compares with arcade-style baseball games and other computer baseball games that are directly translated from board games.

If you’re familiar with Diamond Mind Baseball but want details on all of the new features in version 11, check out the Version 11 Enhancements page”.

Integrity and Honesty:
DMB has shown through the years their honesty and helpfulness.  I had a minor problem that I was slightly embarrassed about and they responded with a solution through their Contact-E-Mail system within a very short time.

Thanks for Reading.  I Hope this was Informative